One Health Workshop in South Africa

Elephants in the National Park

The workshop re-emphasized for me that by collaborating with scientists, medics, vets, community leaders and other experts, statisticians and epidemiologists (like those in Chicas) can help create a lot of good in the world.

The goal of the workshop was to bring early career researchers together to learn about and discuss One Health research. Broadly speaking, One Health research is about considering the greater context of human-animal-environmental interfaces when investigating a particular disease. The workshop focused on zoonoses - diseases that can pass from animals to humans - as well as diseases that pass from wildlife to domestic animals. Throughout the workshop, the meaning of One Health itself was debated along with the challenges and benefits of doing multi disciplinary research. 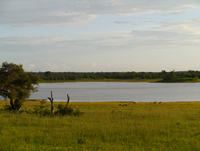 The location provided endless examples of health issues arising from close contact between humans, domestic animals, wildlife, and the environment. There are several zoonoses - including rabies, Rift Valley Fever, anthrax, and bovine TB - that can have a direct impact on human health in the communities surrounding the Kruger National Park. These infections occasionally pass directly from wildlife to humans but are often transmitted through dogs and livestock.

Other infections transmitted from wildlife to livestock have serious economic effects on the surrounding communities. Cattle herders from the area cannot sell their animals or meat internationally or even to other parts of South Africa because the wild African buffalo found in the park and surrounding reserves can pass foot-and-mouth disease (FMD) to the cattle. 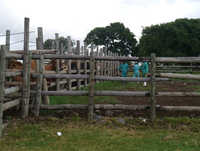 Along with some traditional game drives into the Kruger, we visited the town of Hluvukani where state-employed vets conduct weekly inspections of cattle herds for FMD. We also visited a veterinary clinic run by the University of Pretoria, which conducts surveillance projects for rabies and FMD, and a human clinic from which University of Pretoria researchers are running a surveillance program for zoonotic infections.